Woad blue dyed linen against a winter sky. I invite you to click on the pictures in this site to see brighter, clearer images.

There are amazing facets unique to this Woad blue dye. It is apparent that it was the  tekheleth dye used in Ancient Israel for the Mishkan, by kohanim and by Israelites for their sisith or tzitzith.  See here  Why was this Woad dye superior to any other blue dye in ancient times?

The Woad dyeing process itself is a marvel to see. When fabric is lifted out of the vat filled with the yellow Woad dye, it immediately begins to turn blue when coming in contact with the oxygen in the air. It never ceases to thrill when this beautiful blue appears. This is a delicate dance of chemistry and a wonder that it's complex process was well known so long ago.  see here

Woad is completely colour fast and a gorgeous blue which made it a top quality dye in ancient times. It is never dingy or contaminated with other colours as the needed chemistry doesn’t allow it.  However it can be dyed over with other dyes later to produce different colours.  Madder, a red dye, was commonly used in ancient times to over dye Woad and produce purple.  Samples of this, from antiquity, exist to this day.  see here

One of the most unique characteristics about Woad I discovered by accident.  Almost three years ago I decided to try and get the darkest shade of Woad dyeing that I could, and I did!   It was a very dark blue, with a blue steel tone.   I felt it was too dark but I started tying with it.  After a few months it seemed like it was lighter, but I thought I was imagining it.  After a year I realized that it had both lightened and brightened up.  Through the second year it continued to change  into a lovely deep blue with silver highlights in certain lights.  Turns out the dye continues to develop in the presence of oxygen! This is not a fading but a richer, deeper colour.  Even in this third year it is getting brighter.

Then I came across an article about the Tyrian purple dye from ancient times, which was from the Murex snail.  'The dye was greatly prized in antiquity because the colour did not easily fade, but instead became brighter with weathering and sunlight.'  see 'Background'.   Woad dye and this Murex sourced dye are almost chemically identical. The Murex dye has additional red pigment which can be removed using sunlight during it's dyeing, to give a blue. see here  Woad dyed fabric continues to develop just like  this almost chemically identical Tyrian purple dye, that was reported in antiquity to do!  Now, look how this ties in with what what follows below! 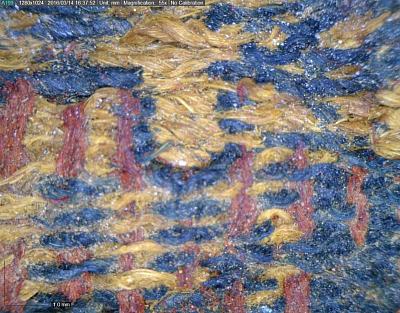 Many samples of 3000 year old wool, dyed with which they are almost certain is blue Woad and red Madder, were found preserved by the arid climate in Timna, Israel.  The colours  of the samples were so good that the researchers said in their video that they were found; "Preserved as if they were thrown away just yesterday".  They also noted; "The textiles date to the early Iron Age (12th – 10th centuries BCE), the time of the biblical kings David and Solomon and some are decorated with a red-and-blue bands pattern.  These are the earliest examples of plant-based dyes in the country and in the Levant (the Eastern Mediterranean)."

I have a complete page detailing this find, including links to this picture, to the video  and to their peer reviewed article see here!

What I am so excited to see is that this ancient sample has the same lovely deep blue as the Woad dyed skeins above!  This is the ultimate proof that Woad does not fade, but continues to develop into this lovely blue.  This continues to be an amazing journey of discovery!