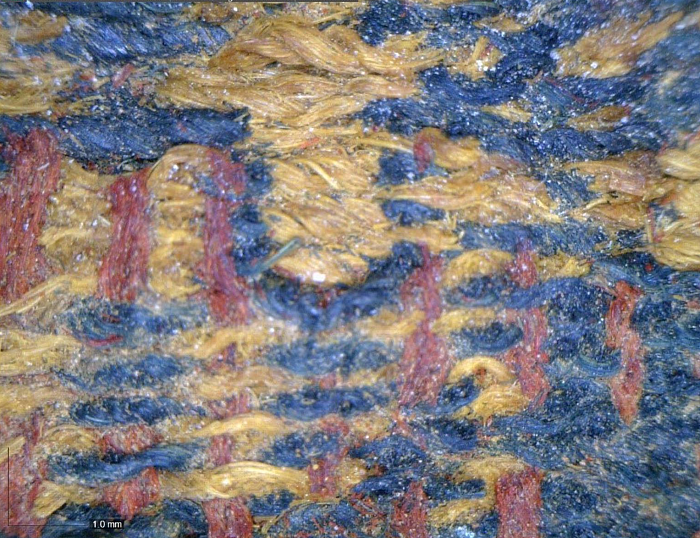 3000 Year Old Fabric from Timna, Israel, Dyed with Woad blue and Madder red. This picture is taken from the PLOS ONE original peer reviewed article and the link is at the bottom of this page

There has been an amazing find in Timna, Israel!

Many pieces of 3000 year old fabric were found dyed with what they believe to be Woad, or if not, from a plant very similar to Woad.  What I am really excited about is that it seems to be the same shade of Woad that I am now dyeing!  I have three resources on this find:

1.  Here is an exciting video, by those researching the find, called;  'What color blue did King Solomon wear?  New evidence tells us'.  I have embedded the video below, but if that is changed, the link to it is   here

2.  Next, I have taken excerpts out of two media articles and added the links to them at the end.  Their information has come from the originating peer reviewed, PLOS ONE, article which I have as the last reference:

'Evidence of the use of plant dyes from the time of Kings David and Solomon has been recovered, according to a new study. The research published today (Wednesday) in the prestigious journal PLOS ONE was led by Dr. Naama Sukenik of the Israel Antiquities Authority and Dr. Erez Ben-Yosef of Tel Aviv University, in cooperation with a research team from Tel Aviv University, Bar-Ilan University, and the Israel Antiquities Authority.

Excavations conducted since 2013 in the Timna Valley and directed by Dr. Erez Ben-Yosef of Tel Aviv University have recovered dozens of fragments of 3,000-year-old textiles, which were preserved thanks to the region’s extreme arid climatic conditions. The textiles date to the early Iron Age (12th – 10th centuries BCE), the time of the biblical kings David and Solomon and some are decorated with a red-and-blue bands pattern.

These are the earliest examples of plant-based dyes in the country and in the Levant (the Eastern Mediterranean). The dyes were identified at the Bar-Ilan University laboratories using HPLC advanced analytical equipment. On analysis, the data indicated the use of two main plants: Madder, whose roots provided a red dye, and indigotin – probably produced from the flowering woad plant – which was used as a blue dye in a long and complex process involving reduction and oxidization that lasted a number of days.

Both these plants are among the best-known plant dyes in the ancient world. Once grown specifically for dyeing in Eretz Israel, their use continued up to the discovery of synthetic colors. The textiles from Timna were colored with true dye, which is characterized by a chemical bond between dye and fiber, attesting to professional knowledge and skill in the art of dyeing during this period.

The colored woolen textiles came as a surprise to the researchers, since during the Iron Age Timna was principally an important smelting and mining site for the production of copper. According to Dr. Erez Ben-Yosef of Tel Aviv University and Dr. Naama Sukenik of the Israel Antiquities Authority, “The findings indicate that the society at Timna, identified with the Kingdom of Edom, was hierarchical and included an upper class that had access to colorful, prestigious textiles.” The context in which the textiles were found suggests that the metalworkers responsible for operating the smelting furnaces were members of this class.

The task of turning stone into copper demanded considerable skill. It was one of the most specialized crafts of the ancient world and the metalworkers apparently enjoyed high social status and wore distinctive, colored garments. In this sense, the findings are a real innovation, since they contradict the previous research supposition that the furnaces in the heart of the desert were operated by slaves.

The rare find of 3,000-year-old dyed textiles provides an exceptional opportunity to address intriguing research questions, including: The “fashion” of elite in the Iron Age, social stratification and organization of early Edom, the economic status of the local population, trade connections, technological capabilities, etc. These rare textiles are being kept under strict climatic control in the Israel Antiquities Authority’s organic-materials storage facility.'

3.  Now excerpts from the originating peer reviewed, PLOS ONE, article.

Go here for the complete article

These are what I felt were pertinent excerpts from the PLOS ONE article. I have removed the technical info and references, to allow for easier reading:

'The results of analyzing the blue fibers, indicate the presence of the indigotin and indirubin.  These components were found in many indigo plants in the world, but in particular from two different species that were known in the ancient world, in the Mediterranean area: Woad (Isatis tinctoria L.) and Indigo (Indigofera tinctoria L.), additionally, they also were known from species of murex snails that were used to produce the purple dye.  However, as the results of analysis using Protocol B (which was identical for the elution of the indigoid dyes that may be present in molluskan purple pigments); included no compounds unique to the murex species, such as monobromoindigotin, or dibromoindigotin, therefore, it is possible to determine that our blue textiles were dyed with indigotin from a plant source.  As of now, the two possible plants (woad and indigo) cannot be distinguished in modern samples using HPLC, and all the more so in archaeological materials, where the percentage of these components is typically much lower.

Nonetheless, it should be noted that (Woad) Isatis tinctoria L. was already known in the southern Levant since the ancient times, while (Indigo) Indigofera tinctoria L., which originated in India, entered into extensive use in the region only after the Islamic conquest after (750 CE).  However, there is still a possibility that a different species of indigo plant might have been used, such as Indigofera articulata or I. coerulea, which were found in archaeological excavations in Israel, date to the Roman period, and are appropriate to have produced the blue color.

The textiles found at Timna suggest, for the first time in the Levant, the use of chemical dyeing processes using dyeing plants and an advanced dyeing technique in which a chemical bond between the dyes and the fiber eventually produced a high-quality dyed textile with color that was resistant to laundering and exposure to the sun.

The results of the current analysis indicated that the textiles at Timna were dyed using two different plants: Madder for red, and plant-based indigotin, probably Isatis tinctoria L. (woad), for blue. These plants are among the earliest known in the dyeing craft.'