The Method of Plaiting for Traditional Karaite Sisith 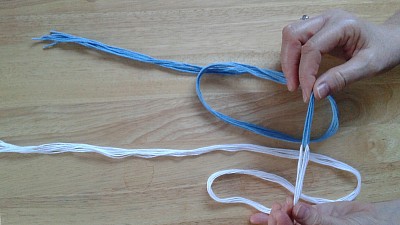 Link the two different coloured groups of strings together

As this is just learning how to plait, use 2 distinct colours of the same type and thickness of yarn or string.  The number of strings should be, when folded in half, able to be four separate strings or four separate groups of strings.  So to practice, cut 4 strings of one colour and 4 strings of the second colour all the same length, about 45 inches or 115 cm long.

Take the first group of one colour of strings and line them up evenly together lengthwise.  Fold the group in half, and keep the strings separated into the 2 groups that the folding made.  Where the middle of that group is folded, open it up to make it look like a 'U' shape. 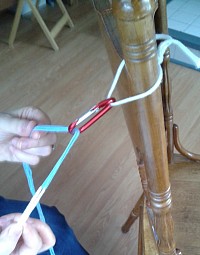 One way is to thread through a hook attached to a chair
Position the group of strings through a hook on the edge of a flat surface, or to a string, or hook, tied to the back of a 'kitchen' type chair or affixed to the edge of a table with a clamp.  Adjust them so that the joining of the two different colours of strings is centered right over the hook.  In the picture to the left they are not centered yet.

The Method of Plaiting

Each hand holds two separate strings or two separate groups of strings, while the other hand holds the same amount. There is a twist of the wrists that is necessary to move the strings to the other strings' position in that same hand. Twist both wrists in the same direction, to the right. The top string goes to the bottom while the bottom one goes to the top. Now you have to arrange your fingers back to their original position while keeping the strings in their new position.  When you get better you will find that you are skipping the step of twisting your wrists and your fingers just move the strings in one motion from top to bottom.

Note: in the pictures below there is a plaited white loop attached to the hook.  That is from making an actual sisith.  For now ignore that and just pay attention to the strings being plaited.

I invite you to click on the pictures to see a brighter, clearer image. 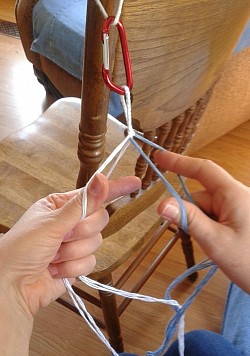 Each hand holds two separate strings or two separate groups of strings. Here one side is blue and the other white. 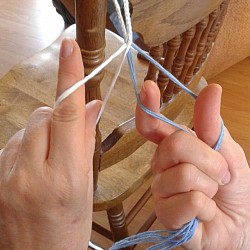 Twist both wrists in the same direction, to the right. The top string goes to the bottom while the bottom one goes to the top. Now arrange your fingers back to their original position while leaving the strings in their new position 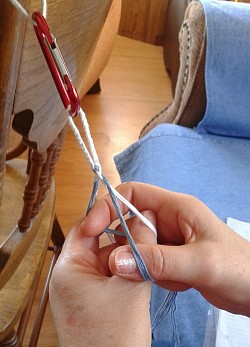 1.  At the beginning of each section of plaiting, your first plait does not need to have the twist, just pass the strings through to the other hand and count this as the first plait.

2.  To avoid tangling; each time you pass the strings through, run the fingers of your right hand down the strings in that hand to separate them from the strings in the left. While doing this, use your left hand's fingers to hold the plait tight to avoid it loosening. If you don't do this you will have a tangle by your second passing through!

3.  As you get more comfortable with this you will then need to make sure you are pulling the plait tight after each passing through. This will make the plait even and match the others that you will be making in the set.

4.  As you progress with plaiting, reposition the sisith up on the hook. This helps the tension to be even through out the sisith and ensure that the plaiting matches in each sisith.

5. Do all four sisith in the same manner. Use the same hook, and position of plaiting. Don't make one with the hook on the back of a chair and next time affix it to a table. You will not have matching finished lengths of sisith! 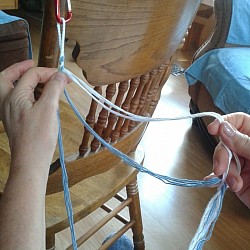 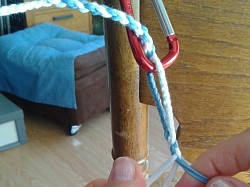