The Mishkan's Blue, Red and Purple 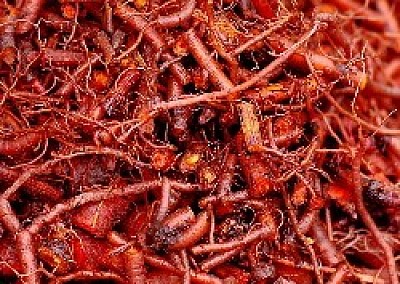 Madder's roots from where it's dye is sourced. Notice that they resemble red worms

I wanted to include what information I have for now on the subject of the other two colours, red and purple, that were given for the Mishkan, as well as a bit more on the blue.  The red most certainly came from Madder, which was so widely used in antiquity and came from a clean source.  Interestingly the roots of Madder, from which it's dye is obtained from, look like red worms!  This picture came from 'Wild Colours', here.

It is obvious that it is quite durable as it was the red on the 3000 year old sample from Timna, Israel that is on my home page and also added below for reverence.

Interestingly, when Woad is overdyed with Madder, and visa-versa, the result is purple.  This was common in ancient times.  Just below is an example from the Middle Roman times. 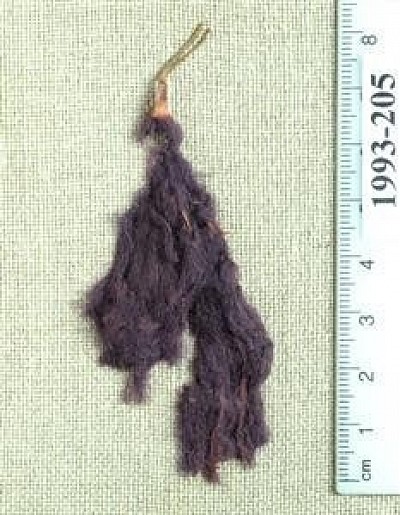 From Israel Antiquities Authority, this is a sample from the Middle Roman period found in the Nahal Hever Cave.  Note that this is either Woad, or the Indigo that was just becoming available from India. 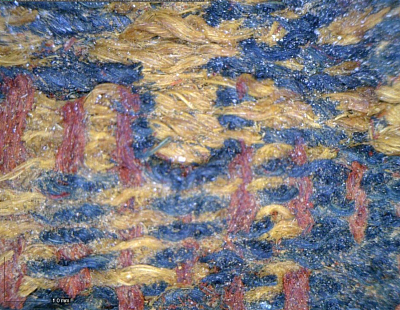 Woad and Madder
I added this beautiful picture of the 3000 year old fabric with Woad and Madder, to get an idea of all three colours together.  The picture of the purple above is not in as vibrant a condition, as this one from Timna. The researchers of the Timna Woad and Madder sample were so amazed at the quality of the colour, saying it was well preserved because of Timna's very dry climate.  The link to this picture can be found on this page.

Here is an answer that

Note;  I had posted this on the Ancients' Blue Facebook page and Ya'aqov Ben Yisrael responded with this comment:

'Eruthrodanon comes from ereuthedanon; ereutheo meant an extract and edanon meant food or something edible; eruthrodanon comes from eruthro which meant red and edanon which meant food or something edible. It was called this because this plant caused the bones of the animals which fed upon it to be red- it had the same effect upon the claws and beaks of birds which ate it. Had nothing to do with binding.'

From the Mishna; a Rabbinical Perspective

From the Original PLOS ONE Article

I have just added this, mostly technical, info on Woad and Madder here from the PLOS ONE article, where the 3000 year old sample of Woad and Madder was documented, for those that might be interested:

'Rubia tinctorum L. is a cultured perennial plant, native to the Middle East and Mediterranean region [14]. The dyes concentrated in the long branching roots of the plant had a central role in the ancient dyeing industry of this region, with documented use by the Egyptians, Greeks, and Romans [14]. Although many species of Rubia are known [14], only a few of them have been used widely for dyeing in antiquity, including R. peregrine L., R. cordifolia L., and R. tinctorum L. Although theoretically possible that the Timna textiles originated from very distant regions by trade (cf. [60] for trade between the Levant and India at this time), the chemical results indicate that the species of R. tinctorum L. is the most likely candidate. At the same time, there is still a theoretical possibility that a different species of unknown Rubiaceae have been used.

Indigoid plants, identified by the indigotin and indirubin components, are listed among the vat dyes [7], indicating a complex and comprehensive process of reduction and oxidation that took several days in antiquity [14]. In the dyeing process, a solution of leuco-indigo of a greenish-yellow shade was created (soluble reduced form) by producing an alkaline solution by cooking all parts of the plant at a low temperature (30°-40°C) for several days and then adding alkaline materials, e.g., by potassium carbonate [61], lime, wood ash or by certain plant, such as Anabasis setifera or Mesembryanthemum nodiflorum, which were used as alkaline material [34,61]. Later is the reduced form of indigotin and forms a yellow water soluble compound. Only after these processes, the wool fleece was dipped into the dye solution. The wool obtained its blue color after being removed from the solution and oxidized in the air [14]. From a chemical viewpoint, suitable conditions (appropriate level of pH, temperature, and oxygen) are created when the leaves of the woad plant are soaked in water during fermentation. The enzymes found in the leaves, a colorless indicant, convert through enzymatic hydrolysis to colorless indoxyl and sugar while the indigotin forms from the combination of two indoxyl molecules by way of oxidation [14]. In any case, dyeing with these plants is more complicated than dyeing with madder, requiring tight control of the temperature and the pH level of the solution, and familiarity with various materials necessary to transform the solution to an alkaline medium. Additionally, the indigotin is reduced by bacterial fermentation–a long process which is often enhanced by adding madder, sugary fruits, treacle, bran, etc. [14,62]. As with madder, the plants were grown primarily for the dyeing industry–in contrast to plants of other dyes and pigments that were also grown for nourishment (e.g., pomegranates and nuts), for fragrance (e.g., saffron), and more.

Various historical sources indicate that the plants identified here (madder and plant-based indigotin) were very well-known as a source of dyestuff in later periods. For example, they are mentioned frequently in Greek and Roman natural history literature (for an overview, see [49,63]), which also indicates that the plants were cultivated; similarly, from archeological findings dated to the Roman Period, it emerges that both plants were used intensively in the textile dyeing craft [34,38,40]. Conversely, evidence dated to the Iron Age and earlier periods is scant in both the archaeological and textual regard. In Mesopotamia, madder was known by its Akkadian name hurratu in texts from the Larsa region of c.1900 BCE [14]. From texts dated to the Neo-Assyrian Empire (9th-7th centuries BCE), it is clear that a dyeing craft based on varied dyestuffs was already known [64]. In a neo-Babylonian tablet dating to the 7th century BCE, two of the oldest recipes appear: one using madder with alum to obtain the red color, and the other describes the double dyeing technique with indigo and madder to imitate the color purple [14]. In the Bible, the name `Pua`(madder in Hebrew) appears as the names of people and family (Num. 26:23) and probably indicates their occupation [65].

The archaeological record is even more limited. In many of the Iron Age sites that yielded textiles, no color fragments were found, including, for example, Kadesh Barnea [66], Tel Deir Alla in Central Jordan Valley [67], and Khirbat al-Mudayna in the southern Transjordan [68]. Owing to the circumstances in which textiles are found, most finds are carbonized and thus the original colors are not preserved. Only few colored textiles were previously recorded: At Site 200 at Timna (the Hathor Temple, also studied here), wool textiles were uncovered that were reported by Rothenberg: “Red and yellow cloth was found… often with beads woven into it” ([28] probably textile no. 2013–9053 of this study). Other red and blue textiles from this site were catalogued in the publication by Sheffer and Tidhar [19] but without dye identification. In addition, other dyed textiles found at Site 30 in Timna (late 12th–9th c. BCE) were published only in a preliminary report [69]. In Kuntillat `Ajrud in the eastern Sinai, several dyed textiles were found dating to the Iron Age. Of these, five were linen textiles dyed blue and an additional textile made of blue linen and red wool [15,70,71]. Dye identification indicated that similar to Timna, plant-based indigotin and madder were used to produce the blue and red colors [70]; however, they are dated to the late 8th century BCE ([72,73]. For a slightly earlier date see [74]), two centuries later than the Timna textiles studied here. It should be noted that outside the Levant, plant-based dyed wool textiles were found, for example, in salt mines at Hallstatt (Austria) that date to 1500–1200 BCE (including evidence of, inter alia, indigo plant and plants from the family of Rubiaceae [51,59]). Other early dyed wool textiles were found in Italy dated to the Iron Age [75], and in China’s Xinjiang province at burial sites dated to the early 2nd through the 1st millennium BCE. Also there, HPLC analysis identified madder and plant-based indigotin [43,76]. In Egypt, dyed textiles were found that predate the findings at Timna; these being textiles discovered in the 18th Dynasty in the tomb of Tutankhamon [77,78] and at the Workmen’s Village at Tel el Amarna (around 1350 BCE), where Rubia tinctorum L. (madder), and plant-based indigotin were detected [79,80]. Nonetheless, in Egypt, the high quality textiles were predominantly based on linen (including the dyed ones [79]), in contrast to the dyed textiles at Timna, which were made of wool. The blue dyes were suitable for coloring plant fibers, such as linen as well as animal fibers, while the red dyes were less suitable for the former [34]. At any rate, it seems that the dyeing of wool textiles–as reflected in the Timna textiles–developed as part of a larger industry (and related commerce) that specialized in wool and, thus, had a separate evolution than the dyeing of other materials. Based on the available data, the textiles presented here–dated to the late 13th-10th centuries BCE–constitute the earliest evidence of plant-based dyed wool from the Levant.'